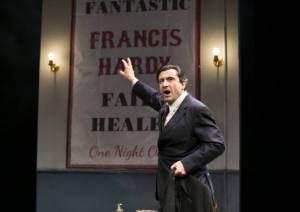 Órla Murray and Susie Dalton, two Irish lasses who love a bit of theatre, went to see Faith Healer at the Lyceum Theatre, Edinburgh, on Friday 16th January 2015. We didn’t particularly enjoy it, but had a great conversation afterwards about the play, gender roles in theatre, and the unreliable nature of storytelling.

Órla – (Or ‘couldn’t care less’ if there are children reading this.)

Susie – Shield their eyes! I went to see Faith Healer a total stranger to Brian Friel’s works. Orla, you’re a fan of his – how did you feel this affected your viewing? If at all.

Órla – Great question Dalton. I’m a big fan of Philadelphia, Here I Come and Dancing at Lughnasa, two of his plays I studied in school. Based on those I was expecting great dialogue, some solid monologues and a moving family drama. I was pretty disappointed because there was no dialogue, just a series of four monologues, and that really took away from the drama of it. I think that’s why the sadness just didn’t get me. I wasn’t invested in the characters, I couldn’t feel their relationships because they never interacted. What about you? What were you expecting?

Susie – I had very few, if any, expectations. Besides the title I had no idea what the play was about, and I’d never seen or read any of Friel’s work before. I had similar issues with the play though; the lack of interaction and relationship development or exposure made it very difficult to care about the characters, particularly in a play that is really based entirely around the relationships of three people. I also found the characters themselves to be pretty unlikeable, and while we all love a good antihero, I felt their unlikeability came from a lack of substance. This was particularly the case for the only female character, Grace, whose entire monologue was about her father, husband and a child she lost, leaving her story and character very underdeveloped. Did you have any thoughts on her role, or the dynamic of the three characters in general?

Órla – Yes I agree, I think that portraying Grace only in relation to the men in her life – her father, her husband, and her husband’s male manager/her friend – made it hard to believe in her. The actor who played her was great but she was working with a stereotypical character that I felt was too limited to really empathise with. Also the structure of three characters, four monologues, with only one monologue by a woman, highlights the broader issue of women having less stage time and lines than men in arts productions. This was actually pretty good in comparison to other productions where women have fewer lines and little stage time, but still much less than the men. What did you think of the other two characters?

Susie – Despite being given the majority of the stage time, being the title character and being the major focus of the other two character’s monologues, I felt that Francis Hardy, the Faith Healer, really didn’t make much of an impression. I’m not sure how much I’m ever going to root for a character who feels this sorry for themself while hurting so many around them, so perhaps it’s a personal thing, but as it reached the climax where finally – finally! – you learned what had happened to him, I really found myself struggling to care. The third character, a Cockney gentleman called Teddy who was Francis’ agent, was easily the strongest of the three characters. The actor, Patrick Driver, brought a very warm and humorous touch to the role, and provided some much needed comic relief and emotional development, but, as the third out of four monologues, this felt like too little too late.

Órla – Yes, I think Patrick Driver was fantastic and really lifted the play in the second act, but it was too late. By that point I was bored and just wasn’t involved in the story. And I wasn’t particularly impressed by Francis Hardy as a character or how he was acted. I think that the play highlighted some interesting things about the stories we tell ourselves and other people; how we re-write the past to show ourselves in a better light, or reframe a story so we can deal with it better. But ultimately this meant the monologues were a little repetitive and it felt like an age before we finally found out what happened. I think overall the structure of the play just didn’t work and didn’t show off Friel’s ability to write dialogue that is both profound and conversational at the same time. Whilst the lighting and set were great and some of the acting was great, it wasn’t enough to engage me in the story. So what do you think the ‘take-home’ message of the play was? Or what was it supposed to be?

Susie – Perhaps to avoid seeking that next triumph or that next high at the sake of yourself and your loved ones; appreciate what’s there now. There was definitely some sort of lesson to be learned in there about inflicting your unhappiness on others, and on the dangers of constantly seeking further fulfilment. But I felt the lack of character development and the empty yet self-indulgent emotional output of the main character took away the impact of this message, leaving you feeling a bit empty yourself at the end.

Órla – So I suppose most of our issues were with the structure of play itself (come on Brian!) rather than this particular production?

Susie – I suppose so. Come on Brian.