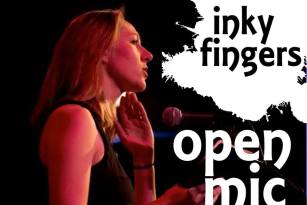 The great thing about Inky Fingers open mic nights is their complete lack of elitism. Slams and competitive poetry events are fun, but I always enjoy a poetry open mic because I know there’s no competitive reasoning behind why these poems were chosen. Our evening embodied that relaxed and open atmosphere. The event was separated into three parts, two parts open mic and a middle period with a performance from guest poet Katie Ailes. For the purpose of this review, I’ve decided to pick out a few of the poets that I really liked, coincidentally all female.

I loved Finola Scott immediately. She flowed from introducing herself and her work with very easy humour, into some lovely poetry that dealt with some quite dark issues. One of her poems that really struck me was an extremely personal piece dealing with reclamation of her own body. She was incredibly funny in her introduction, hoping that she wouldn’t embarrass her ‘young’ audience, then proceeded to perform a poem about… tits. It began with a lament about the way a partner described her breasts as ‘his boys’, and the ways in which she was made to feel like her breasts were not hers, but only existed for the sexual pleasure of others. Her final statements of reclamation of her own breasts, and the reconnection with her own body were incredibly positive and powerful, (I had to stop myself from shouting “YES” from my inconspicuous seat at the back).

Agnes Tӧrӧk began her light hearted performance with a warning that her first piece would involve audience participation. The words ‘audience participation’ do not fill me with joy. But Tӧrӧk mingled a hands up reaction from the audience into her piece about happiness, and what we picture when we think of happiness, specifically how we picture ourselves as happy, and she did it well. She speculated that what many people picture when they think of happiness is the stock photo of a young white woman eating a salad. This poem explored the relationship between happiness and money, health, weight, even race somewhat, and questioned why indeed these things are associated with making someone happy. Her next choice of poem worked extremely well alongside her first: an autobiographical tale of a group of women in a hospital ward. Tӧrӧk’s choice of subject was new, fresh and engaging, and very enjoyable.

Katie Ailes, the guest poet of the evening, lived up to her reputation- winner of multiple slams in Scotland, including the  National Library of Scotland’s Burns Night Slam in 2014, and the University of Edinburgh Literature Society slams in November 2012 and January 2014, amongst many other accolades. She shared with us some very intimate pieces, exposing her emotions surrounding leaving home (she is originally from Pennsylvania), her relationships with family and a movement into a new chapter of her life in Scotland. Her poetic achievements perfectly reflect her work, both in the poems themselves and in her presence and comfort on stage. Her website will be linked at the bottom of this review, it contains blog posts mostly surrounding the subject of slam politics (something I didn’t even know existed!) and she also publishes her upcoming events, so I would strongly urge you to visit her website and head along.

Inky Fingers open mic is an event that you would not want to miss. It’s informal, relaxed and welcoming, and it takes place usually the first Tuesday of the month, from 8pm-11pm at The Forest Café. They encourage new readers, so if you’re dying to share some of your own written word with some real life humans and not just your mirror (is that just me?), definitely head down there.