On Monday I returned to Hidden Door festival for their fourth evening, to what promised to be a great line-up. I was hoping to catch Glasgow band Featherwest at 6pm, but after waiting around for half an hour I gave up and went around exploring the venue some more. I discovered more art on this second visit and particularly worth mentioning was a performance consisting of human bats sampling real bat sounds while having a jam session. This was one of those moments of art-awkwardness where you’re wondering if you’re actually supposed to be there. Great sock-sandal combo, though. 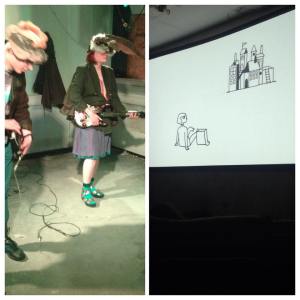 Midi Paul in the Cage bar was the first band on Monday for me, and they were great. I also had a look at the short films from animation collective Twelfth House. Showcased in the Secret Cinema with large sofas and dim lighting, it was a nice space to get drawn into the funny, sad and intricate animations by students from Edinburgh College of Art. What is so great about Hidden Door is its allowing for a great variety of expression in a labyrinth of spaces: visual art and sound installations in some rooms, while gigs are going on in others. Later on I tried to see my first bit of theatre of the festival only to be turned down at the door, as there were no more seats for Macbeth in Silence.

Being a woman and going to festivals (or clubs/pubs and other places) at night can sometimes be unpleasant and scary. As the festival is entirely run by volunteers, I was curious to find out what their procedures were for dealing with potential incidents of sexual harassment. Hazel, one of the team members, could tell me that they have professional security on site for their evening events, both to brief the volunteers on shift and to deal with any reports of dangerous individuals. 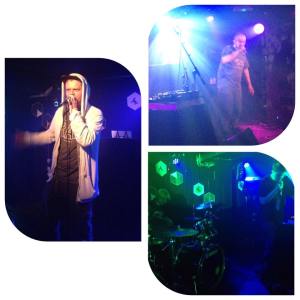 I headed over to Bongo Club were I finally found Featherwest, which included the only women musicians I saw all evening, and caught the Black Lantern label showcase. Full disclosure, I really like this label and this was the main reason why I grabbed a Monday festival pass. First up was Tickle, who started off commenting on the unnecessary gender binary of ‘ladies and gentlemen’ before encouraging us all to ‘hug the government’ (sarcastically). Next up were Dust feat. Texture who described themselves as what would happen if Rage Against the Machine and Depeche Mode had a baby. 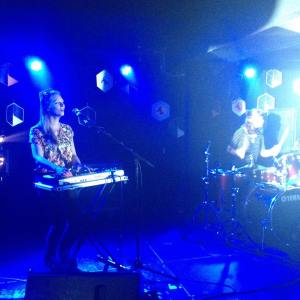 I was beyond thrilled by the performance of Scottish rapper Loki, who really stirred up all the socialist feels (if you’re into that kind of thing, which I am). I was, however, hoping singer-songwriter Becci Wallace, with whom he made the Government Issue Music Protest (GIMP) album, would join him. As with most good things it’d be cool if people were as good on gender issues as they are at dismantling the government (sadface). I regrettably only caught the start of Krowne and missed out on Morphamish, but I do recommend you check out Black Lantern music online.

Hidden Door festival is on until Saturday 30th and is free until 6pm, then ticketed at £13-20 pounds.